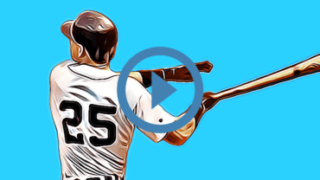 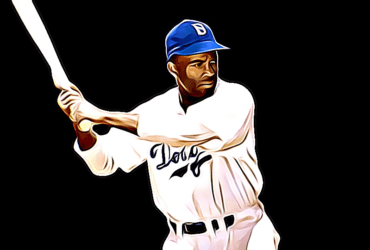 When Jackie Roosevelt Robinson took the field for the Brooklyn Dodgers on April 15, 1947, he blazed a trail for African American ballplayers. That legacy lives on today. In the last ten seasons, 15 of the 20 league Most Valuable Player Awards have been awarded to African American or Latino ballplayers.

“I know he thought hard about what might happen if he failed,” Robinson’s daughter Sharon told the Hall of Fame last year. “He had to resist the temptation to lash out at the abuse he was fed. It was [something] Mr. Rickey insisted on.”

Branch Rickey, the general manager of the Dodgers, braved criticism when he signed Robinson to a minor league contract in 1945, ending more than 50 years of segregation in the major leagues. In a speech in 1956, Rickey said: “I wanted a man of exceptional intelligence, a man who was able to grasp and control the responsibilities of himself to his race and could carry that load.” He found such a man in Robinson. As a result, the two men, who both eventually were inducted into the Hall of Fame, were closer personal friends the rest of their lives.

“Branch Rickey was like a father to my dad,” Sharon Robinson said. “They shared a common experience, a bond that was unique. My dad respected him and admired him immensely.”

Baseball’s First Rookie of the Year

In his first season with the Brooklyn Dodgers, despite facing resistance from fans and opposing players, in addition to animosity from a few of his own teammates, Robinson won the Rookie of the Year, an award which is now named in his honor. In his rookie campaign, despite the pressures of being the first African American to play in the major leagues since the 19th century, Robinson scored 125 runs, batted .297, and paced the league with 29 stolen bases. With his unyielding style of play, Robinson won the National League Most Valuable Player Award two years later, hitting a league-best .342 with 203 hits, 122 runs scored, 16 home runs, and 124 RBI. He also led the league in stolen bases with 37. Fueled by Robinson’s spark and versatility (he played regularly at four defensive positions in his career: first base, second, third, and left field), the Dodgers won six pennants in his ten-year big league career.

So impressed was Chuck Dressen, his first manager with the Dodgers, that he said, “Give me a pitcher and five players like Jackie, and I’ll beat a team of nine players.”

In one of his most crucial performances, Robinson snared a line drive at a critical juncture of the game on September 30, 1951, against the Philadelphia Phillies. After making the catch at second base, which Roy Campanella called “the greatest play I’ve ever seen,” Jackie doubled the runner off second and preserved an 8-8 tie in the 13th inning. The next frame, Robinson belted a home run into the upper deck to win the game, 9-8, for the Dodgers. The win, sparked by Robinson’s brilliant play, set the stage for the famous three-game playoff series with the New York Giants, which began the following day.

Daring and Thrilling Style of Play

Robinson’s style of play impressed those who saw him play and those who competed against him. “He was the greatest athlete to ever play in the major leagues,” Hall of Famer Ralph Kiner said in 1969.

But even more important than his baseball exploits, Robinson changed sports and the country. Because of his courage, Robinson was awarded the Congressional Gold Medal earlier this year. Sharon Robinson believes her father would be proud of the achievements in baseball by African Americans, but that he would push for more progress.

“My father loved the game of baseball. It gave him everything he had, and he gave it everything he had. He cared so much for the game [and] he would expect baseball to continue to make strides in hiring minorities.”

Give me a pitcher and five players like Jackie, and I’ll beat a team of nine players

Refused to Join the Giants

Robinson retired on January 5, 1957, nullifying a trade that had sent him to the Giants for Dick Littlefield and cash. He finished with a career .311 batting average, 1,518 hits, 947 runs scored, 137 home runs, 197 stolen bases, and a .409 on-base percentage. He was elected to the National Baseball Hall of Fame in 1962, the first African American to be so honored. In his retirement from baseball, Robinson was in the forefront as a leader in the civil rights movement.

After Robinson’s death in 1972, his wife Rachel has continued to be active in civil rights and women’s rights. She will be in Dodger Stadium in Los Angeles tonight to celebrate the second Jackie Robinson Day. Her civic pride has inspired her children, who continue to advance the legacy of Jackie Robinson through their own efforts. Daughter Sharon works for Major League Baseball, coordinating community and educational programs, such as RBI (Reviving Baseball in Inner Cities).

“I’m so proud of my father, of course, but my mother has also been a role model. The two of them were partners. My [father] relied on my mother and she was there for the times when it was tough for him,” Sharon said. “When he came home from the ballpark after a tough incident, she was the one he leaned on. I’m so thankful to have the opportunity to continue my family’s involvement with baseball.”

At least one of the players who followed Robinson into the big leagues marvels at his courage. “Jackie’s character was much more important than his batting average,” said Hank Aaron in an interview with Time magazine in 1999. “To this day, I don’t know how he withstood the things he did without lashing back.”