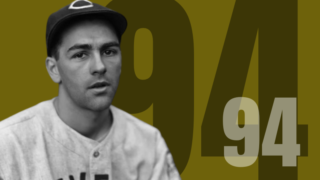 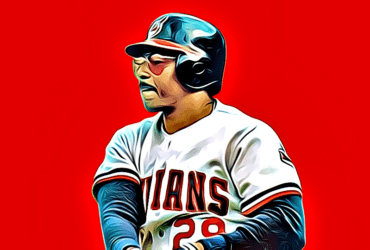 When teams prepared to face the Cleveland Indians in the early 1980s there was one hitter they took extra time discussing – #29, the big guy in the middle known as “Thunder.” Andre Thornton was the most feared member of the Tribe’s offense for several seasons, and his humble and dedicated approach to the game earned him respect from everyone in the game.

Thornton was a big, strong right-handed batter who posed a menacing figure in the batters’ box – standing near the plate, his hulking arms dangling over the strike zone, poised to flick the bat through the strike zone. But his was a tempered aggression, as Thornton was a selective hitter who rarely offered at a pitch unless it was a strike. When he did make contact he sent line drives across the diamond and high flies into the stands. He slugged 214 homers for the Indians, most of them coming in his eight full seasons with the team.

That Thornton was even able to have an All-Star career with the Indians was remarkable considering it began with tragedy. Just weeks before his first spring training with the team in 1977, Thornton’s wife and three-year old daughter were killed in a car accident in Pennsylvania. Thornton and his four-year old son survived, and despite concerns that he might need to take time off, Thornton started the season with his new team. He struggled understandably, and at the All-Star break in ’77 he was barely hitting over .200, but the power was there – he had 13 homers. In teh second half he hit nearly .300 and clubbed 15 homers while receiving a standing ovation at nearly every home game. The Cleveland fans were squarely behind their new inspirational hero.

The first baseman hit 33 homers and had 105 RBI in his second season in Cleveland. It was then that he made a decision that would change his life – Thornton bought a home in Cleveland and chose to make the city his year-round home. “It was something different,” Thornton told The Sporting News, “not a lot of players were living there. I decided I wanted to be a part of it.”

Thornton is still a big part of Cleveland – he still lives there 25 years after his last game. He’s a successful businessman and motivational speaker, often sharing his Christian faith with those who want to listen. That strength of faith helped him get through the difficult loss of his wife and daughter. He remarried in 1979 – the same year that Major League Baseball honored him with the prestigious Roberto Clemente Award. The award is given to the player who “best exemplifies the game of baseball, sportsmanship, community involvement, and the individual’s contribution to his team.”

With Cleveland for 11 years (he played in 10 due to an injury that forced him out of the entire ’80 season), Thornton was accustomed to adversity on the diamond. Only three times did the Tribe post a winning record during that time, twice by a single game. It’s not an exaggeration to say that Thornton never played in a meaningful game (in regards to the pennant race) in his entire career. Previously he played for a Montreal team that lost 107 games and losing teams with the Cubs. But he did his part, slugging 253 homers and averaging more than 90 RBI per season for his career.

Thornton carved a special place in Cleveland sports history, serving as one of the few bright spots on their teams during his years in uniform. Considering how much he overcame and endured, Thornton deserves to be remembered for that, as well as his fine performance with the bat.

I love this guy ,I want him to come and speak in PATERSON NJ?
SUPERMIGHT777@GMAIL.COM