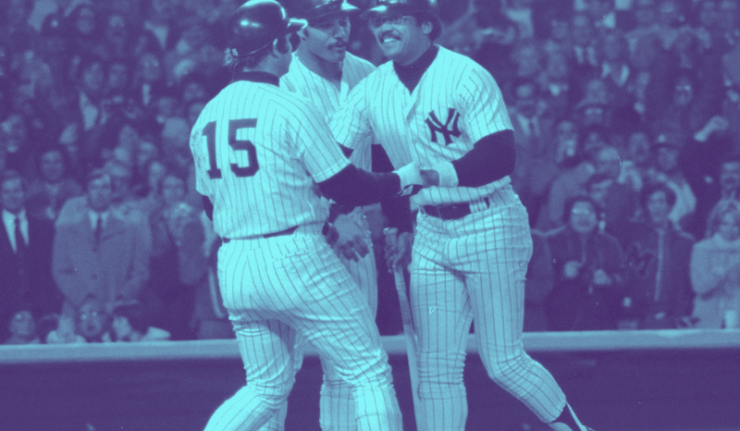 That’s what Reggie Jackson said after his spectacular performance in the 1977 World Series when he belted three home runs in Game Six against the Los Angeles Dodgers.

Now, 35 years later, Pablo Sandoval has joined Reggie and two others (two others –  well, they happen to be Babe Ruth and Albert Pujols – some others) in the select group of hitters who have smacked a trio of home runs in one World Series contest.

Ruth and Phat Albert and Pablo may have matched Reggie in this feat, but none of them matched him for the drama surrounding it. Ruth hit his three homers (he did it twice) in Game Two and Game Four, once in a Series the Yankees lost. Pujols turned the trick in a Game Three laugher over the Rangers last fall. Sandoval, as impressive as his three homers were, did it in Game One, before most fans had even settled in and started to enjoy the Fall Classic.

But Reggie, well, he did it in grand style.

“I didn’t come to New York to become a star,” Reggie said when he signed a lucrative free agent contract to become a Yankee, “I brought my star with me.”

At no other time did that star shine brighter than at Yankee Stadium on October 18, 1977, when Jackson swatted his way into the history books.

In retrospect, it’s amazing that the Dodgers ever threw a strike to Jackson in Game Six. The previous game, in Los Angeles, Jackson belted a home run in his last plate appearance. It was Reggie’s second of the Series. He was getting on base other ways too, leading both teams in runs scored.

But Tommy Lasorda’s Dodgers got to the Series in large part because of their pitching, and if they were going to capture the last two games in The Bronx and win the title, the pitching would have to be top notch.

Reggie didn’t wait to see if the Dodgers were going to be coy with him. He swung at three strikes and hit all of them out of the ballpark. His other time up he walked on four pitches.

The Yanks were behind 3-2 in the 4th when Jackson came up after Thurman Munson singled. Burt Hooton threw a fastball waist high over the plate and Jackson’s long swing buzzed through the zone. Goodbye, baseball. Yankees 4, Dodgers 3.

In the next inning, reliever Elias Sosa was on the mound with the Dodgers trailing 5-3. Two were out with Mickey Rivers dancing off first base. First pitch fastball at the letters – gone. Jackson swatted the pitch deep to center to send the crowd into a frenzy. Yankees up, 7-3.

That was the score in the 8th when Reggie led 0ff the inning. This time, Charlie Hough was on the hill. Hough was about as different from Hooton and Sosa as you could get. Hough relied on a delivery that concealed the ball, and he threw one pitch about 75% of the time – the knuckleball.

The object of the knuckleball is to throw it without any spin – no rotation at all. That would be the perfect knuckler. Hough did not throw a perfect knuckleball. Instead, it floated to the plate with some mild rotation and didn’t dart around like a knuckler should. Since it was traveling all of maybe 70 miles per hour, it was like serving a pitch to Reggie on a tee. Jackson uncoiled and sent it soaring into the black sky. Third home run, third swing, Yankees lead 8-3.

Jackson’s swing was a thing of beauty: a long uppercut stroke sent through the strike zone with his strong arms and shoulders, his hips pivoting perfectly, his extension so good that his back leg practically scraped the ground as he followed through. The slugger tossed his bat aside like a toothpick and watched the baseball fly away. He reveled in the moment, and why not? Love him, hate him, he was impossible to ignore.

And think about it: Reggie Jackson was not a Yankee icon before that game. It was just his first season in pinstripes. He was no more a Yankee in ’77 than Raul Ibanez was when he donned the New York uniform for the 2012 season. But the three pitches, three swings, three home runs, all changed that.

“He saw a perfect pitch to hit,” Dodger catcher Steve Yeager moaned in the losing clubhouse after the game. “It was a knuckler that just hung right there.”

Jackson’s star – the one he brought with him – was set in lights and it was shining all over New York. It hasn’t dimmed since, as Reggie Jackson is “Mr. October” everywhere he’s introduced in the city. His special night 35 years ago was the stuff of legends.