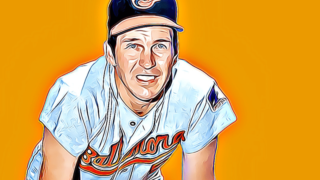 Joe Mauer, Buster Posey, and the Hall of Fame 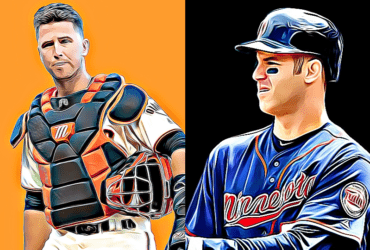 Joe Mauer hasn’t squatted behind the plate since 2013. But he’ll still be a Hall of Fame catcher someday. Won’t he?

The popular Twin, a humble hometown kid, won three batting titles in his first six seasons. He won the Most Valuable Player Award in 2009 and he was skilled enough behind the mask to earn three Gold Glove Awards. Mauer was an excellent catcher and a dangerous contact hitter rarely seen in his era, especially from his position. He also still has a .300 career average entering 2017 and although he’s playing first base and slowing down rapidly as an offensive player, he could hit .267 for three more full seasons (of 450 at-bats) and still maintain his career .300 mark. He’ll also soon eclipse the 2,000-hit mark, something only nine other catchers have done.*

It’ll be hard for Hall of Fame voters to ignore Mauer’s three batting crowns, a career .300 average, and that MVP. Ten catchers have won the MVP award and only two of them are not in the Hall: Elston Howard and Thurman Munson.

Buster Posey is four years younger than Mauer and he made his major league debut five years after the Minnesota star. In March Posey will turn 30 years and he’s still putting down signals behind the dish. He’ll need to average only 110 games behind the plate the next two years to surpass Mauer’s career total. Buster has one Gold Glove and will probably add to that total in the next few seasons. He’s accumulated some hardware too: he was named Rookie of the Year, and Buster won an MVP in his fourth season (Mauer did it in his sixth). If we look at MVP award performance, Posey has received votes in six different seasons, while Mauer has been recognized in five.

Like Mauer, Posey hits for a high average, though he has more power. For his career, Mauer has hit a homer every 45 at-bats, while Buster is at one per 28 at-bats. Posey has an advantage in extra-base percentage — 31 percent of his hits have been for extra bases as opposed to 29 percent for Mauer. And Joe’s power numbers are deteriorating to the point where he’s a below average hitter, especially troubling for a first baseman.

Comparing Posey and Mauer by WAR

For those interested in advanced statistical analysis, Mauer holds an advantage in Wins Above Replacement (WAR). Obviously since he has five more years under his belt, Mauer holds a career edge (50 to 33 entering the ’17 season), but Posey should pass him, and he’ll have earned more of it as a catcher. For peak value, Mauer also rates ahead of Posey (38 WAR in his best seven seasons compared to 33 for Buster), but the Giant catcher has a chance to close that gap, he’s only 30 years old and could put up a few more “peak” style campaigns.

I think if you asked most baseball writers right now they would say Mauer is a definite Hall of Fame catcher, while Posey has to do more. That really isn’t evident by the statistics. Give Buster just two more years at catcher and he’ll surpass everything Mauer did at that position, save for the two extra batting titles. But there is a wide gap between the two in one area.

Entering 2017, Mauer’s 14th season and Posey’s ninth, the Giants’ catcher has a 3-0 advantage in championships. In 2010, 2012, and 2014, Posey was arguably the most important player on three World Series-winning teams. In 2010 he was Rookie of the Year and had three game-winning hits in the postseason. Two years later he was NL MVP when he hit a blistering .385 in the second half of the season to lead the G-Men to the pennant. He had five RBIs in the first round of the playoffs and hit three homers in the postseason. Two years after that, Posey was sixth in NL MVP voting and handled a top pitching staff as the team won their third title in five years. He’s been a superstar for one of the great modern baseball dynasties. That’s quite a résumé.

Only six catchers have been regulars on three or more World Championship teams. There’s the Yankee contingency: Yogi Berra (with eight), Bill Dickey (seven), and Jorge Posada (four); then there’s Posey, Mickey Cochrane, and Johnny Roseboro with three each. Yogi, Dickey, and Cochrane are in the Hall of Fame, and coincidentally, they (along with Buster) are the only three-time champion catchers to also win the MVP award.

Mauer helped the Twins to division titles three times, but the team failed to win even one game in the playoffs. He’s never sniffed the Fall Classic. That shouldn’t hurt his Hall chances necessarily, but it does strike a stark contrast to Posey, against whom Joe will be compared when their Hall of Fame credentials are examined. Mauer will retire many years before Posey: he’s had knee and back injuries almost annually for a decade. Catchers normally age quickly, and Buster could slip fast after his 30th birthday, but it seems more likely that he’ll buck that trend, like Pudge Rodriguez and Posada did, to play 1,500 plus games behind the plate. If so, Mauer’s name could be off the Hall of Fame ballot long before Buster is up for consideration.

Comparing them to Hall of Fame catchers

The “inner-circle” of Hall of Fame catchers is Johnny Bench, Roy Campanella, Yogi Berra, Gary Carter, and Ivan Rodriguez. The next group consists of Carlton Fisk, Mike Piazza, Mickey Cochrane, Bill Dickey, and Gabby Hartnett. Then there’s Ernie Lombardi, Rick Ferrell, Roger Bresnahan, and Ray Schalk. (I’m excluding the negro leagues catchers and those catchers who played primarily in the 19th century. Not because they aren’t important, but because it’s very difficult to rank them against these others.)

Lombardi, Ferrell & Co. are the weakest catchers in the Hall of Fame, and Mauer and Posey are already more qualified than any of those candidates. I think Mauer will end up at the top of that group or somewhere at the back end of the second group, perhaps ahead of Hartnett but not with Dickey and Cochrane. Posey, on the other hand, if he sticks at the position for another five years or so, has a chance to be right in the thick of that second group. It’ll be tough for Posey to crack the inner circle because he doesn’t hit for a lot of power and he won’t last as long as the far superior defender Rodriguez.

Historically, catchers have not fared well in Hall of Fame voting. As I wrote recently in an article about Pudge Rodriguez, even Yogi had to wait two tries to be elected. Carter and Piazza, two of the top hitting catchers in history, were made to wait a while for election to Cooperstown. But things might be changing.

Rodriguez was elected in his first year of eligibility despite rumors of performance-enhancing drug usage. The electorate seems to be softening on steroids. Neither Mauer nor Posey has ever been accused of using PEDs, they are clean players with excellent reputations. The only thing that might stop them from being elected immediately is the HOF’s age-old bias against receivers.

But given what they’ve already done, and assuming a normal aging process for Mauer after his 34th birthday and a normal (if not impressive) second half of his career for Posey, both will earn a plaque in Cooperstown. Thus far, including 2017 inductee Rodriguez, the baseball writers have elected only ten catchers. We have two men worthy of it playing right now.