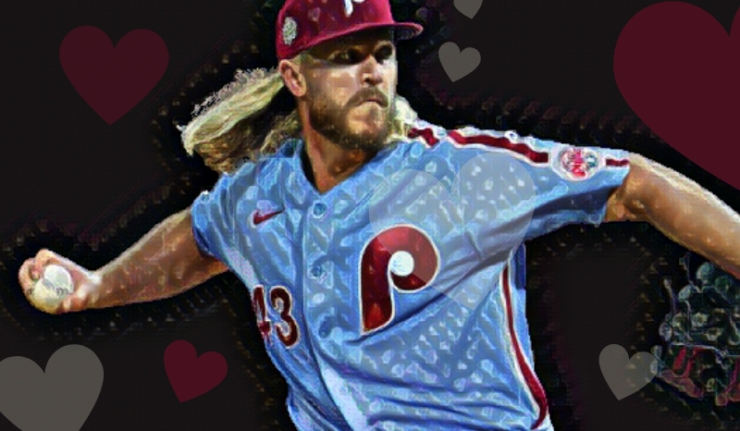 With Valentine’s Day just around the corner, it’s understandable that you want to meet your significant other. Baseball players have always been among the most eligible bachelors. And MLB is by far the most famous baseball championship in the world.

In 2022, there will be plenty of talented baseball players in the United States. But some of them are not only breaking records on the field. On the contrary, they have also been stealing hearts off the field. In this blog post, we look at the top 5 baseball players worthy of your giving a unique Valentine’s Day card.

After all, nowadays, it’s much easier than it used to be to create a beautiful Valentine’s Day card. All you have to do is access a free online editor, choose one of the many valentines day templates available and craft a unique card for your idol. And that’s it. But which players would you give a Valentine’s Day card to this year?

Let us find out!

Finding Your Valentine in MLB: 5 Baseball Players You Should Create A Valentine’s Day Card For

Don’t get us wrong. Finding the perfect valentine isn’t easy. It comes down to your personal style and preferences. After all, picking your significant other is 100% subjective. But there are a few MLB players that are simply irresistible.

In the following list, we will have a look at the top 5:

According to recent statistics, most MLB teams have hundreds of thousands of followers on social media. The same is true for the most successful baseball players too.

With more than 250k followers on Instagram, the LA Dodgers star is one of the most well-known baseball players worldwide. But Noah Syndergaard is also considered one of the most handsome athletes. If you’re looking for a valentine that looks pretty much like a Scandinavian god, Syndergaard is your best bet. It is no wonder why fans are calling him “Thor.”

At 30, Noah Syndergaard has already had a significant career to showcase. The baseball star was born and raised in Mansfield, Texas. The Toronto Blue Jays drafted him in 2010, but his professional baseball career started in 2015, when he debuted for the New York Mets.

A year later, he participated in the All-Star team of 2016. Since then, he has also played for the Los Angeles Angels, the Philadelphia Phillies and the Los Angeles Dodgers.

Kevin Keirmaier was one of the most well-known bachelors in the baseball world. Of course, since 2017, he has been happily married to Marissa Moralobo. But, since this blog post is about talented and good-looking baseball legends, Kevin Kiermaier couldn’t be left out. At the age of 32, Kiermaier plays for the Toronto Blue Jays.

The baseball star has a significant baseball career as well. In high school, he won a state championship in Indiana. He made his debut with the Tampa Bay Rays in 2013 and stayed on the team for almost 10 years. During this period, he won the Gold Glove Award three times and the Platinum Glove Award in 2015.

Besides being a top-notch center fielder, Kevin Kiermaier is also one of the most handsome players in the league. This is why we are sure that, if he were available, he would get multiple Valentine’s Day cards in 2022.

With almost 1 million followers on Instagram, Kris Bryant is one of the most popular MLB players for all the good reasons. “KB” has a prosperous baseball career. The Chicago Cubs drafted him in 2013 as the 2nd overall pick. In 2015, he won the NL Rookie of the Year award. Since 2015, he has participated in four All-Star games.

Kris Bryant also won the World Series championship with the Cubs in 2016. The same year, he was awarded the NL MVP title. After seven successful years in Chicago, he left for the San Francisco Giants in 2021. Currently, he is playing for the Colorado Rockies.

With almost 3500 at-bats, Kris Bryant is more than just a handsome player. He is a legend for the sport.

Born in Scottsdale, Arizona, James McCann was always destined to become one of MLB’s most successful center fielders. In 2020, he won the championship with the Los Angeles Dodgers.

His MLB career did not start in 2016 because of a hip injury, but in 2017, the same year, he won the NL Rookie of the Year Award. He was the NLCS MVP for 2018 and the NL MVP for 2019. Unfortunately, he had a series of injuries in 2021 that turned into a nightmare season for Bellinger.

But considering he’s only 27 years old, Cody Bellinger has a bright future ahead of him. Both on and off the field.

Our final selection is the German-American baseball star, Max Kepler. The outfielder has been in the MLB since 2015. In all these years, he has only played for the Minnesota Twins. During the ongoing (2022-2023) season, Kelper has a .232 batting average.

Unlike the other players on this list, Kepler was not born in the US. Born and raised in Berlin, Germany, he started his career with the Buchbinder Legionäre Regensburg in the Bundesliga. After all, this was where his parents met and fell in love.

But the fact that his mother is a professional ballet dancer from Texas helped Max understand that his future lies in MLB. As of 2022, Max Kelper isn’t married and is reportedly single.

Of course, there are many more baseball players to whom we would easily give a Valentine’s Day card. For example, athletes like Adam Ottavino, Anthony Recker, Mookie Betts and Kike Hernandez have forced us to cheer for their teams on multiple occasions.

In any case, the MLB is a league you should definitely follow if you’re trying to find your next valentine.