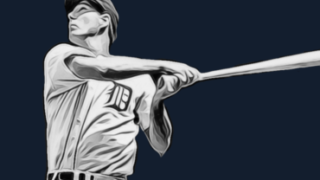 At spring training in Bradenton in 1935, Babe Ruth didn’t see any point in going north with the Braves. But ultimately, he did go and as a result he spent a few weeks playing baseball in Boston again, where his major league career had started more than two decades earlier.

The Babe hadn’t worn any uniform other than that of the Yankees in fifteen years. He spent the winter months of 1934-35 more concerned with getting sand between his toes than he did thinking about baseball. While Ruth was on a trip to Hawaii and other Pacific islands, his contract with the Yanks expired. The team had made it clear that they had different plans for right field and the 39-year old over-the-hill slugger wasn’t part of them. So much for loyalty.

While Ruth didn’t think the Yankees would change their minds and invite him to spring training for a sixteenth season in pinstripes, he did feel like he had a lot left to offer the game. But no one offered him the job he really wanted — manager. Ruth wanted to transition into the dugout just like many great players had before him. Rivals Ty Cobb and Tris Speaker had been given their chance to lead clubs, and the Babe’s only rival for batting supremacy in the 1920s, the unlikable Rogers Hornsby, also found success in that role. Yet no big league club even gave Ruth a thought in that capacity.

There was one desperate man who was willing to hire Ruth in 1935. Emil Fuchs was deep in debt, almost broke, and at his wits’ end. Ever since he’d bought the Boston Braves in 1922 as a favor to one of his best friends, Christy Mathewson, his luck had been bad. He didn’t help himself by making some terrible decisions along the way. By 1935, Fuchs could no longer afford to pay the rent at Braves Field in Boston, he barely had enough money to bankroll his front office, and he was desperate for a savior. George Herman Ruth was his lifeline.

Fuchs arranged to purchase Ruth from the Yankees and to offset the paying price he fired three of his front office staff. He offered Ruth the titles of “Vice-President of the Braves” as well as “Assistant Manager.” Of course, the Babe would be on the active roster too. No one really knew what “assistant manager” meant, but the Babe was assured that it was merely a warm-up for stepping into the managerial duties in 1936.

That’s why Ruth found himself with the Braves in Bradenton for spring training. But it didn’t take long for the Bambino to realize that Fuchs had played him like a chump. Manager Bill McKechnie had no desire for an “assistant” anything, the team was terrible, and the clubhouse was in disarray. It was obvious that Fuchs was floundering fast. The only question was whether or not he would bring the Braves to the depths with him.

At 40 years old, the Babe was more than a decade older than almost every player on the roster. The Braves were an untalented group (they would lose 115 games in ’35) and the people of Boston knew it. Their home attendance averaged about 3,000 per game. Many of the players knew a lot of the fans by first name, that’s how intimate the games were.

The Babe’s first game in a Braves’ uniform was an event. On Opening Day at Braves Field on April 16th in front of more than 22,000 fans, Ruth hit a home run off Giants’ lefty Carl Hubbell to help his team to a 4-0 victory. But that was one of the few highlights of the season and one of the few times attendance reached five figures. It was clear that Fuchs wanted Ruth in the lineup to sell tickets and create a show. McKechnie wanted to make out his own lineup. Ruth started out pretty good at the plate, then he went into an 0-for-20 slump over a three-week stretch that forced McKechnie to bench him.

The video below shows Ruth after he had decided to jump the burning ship. Severely overweight, disinterested, and disgusted by the hopeless situation, the Babe had decided several days earlier that he was going to pack it in and head back to his home in upstate New York. On May 25th in Pittsburgh he had one last hurrah, belting not one, not two, but three home runs against the Pirates at Forbes Field. Each home run was pulled down the line in right field, the Babe showing he still had the ability to turn on pitches and park them into the short field. His last homer, #714, was also the last hit of his career.

On May 29th, the Braves were in Philadelphia’s cozy little Baker Bowl to face the Phillies for a Wednesday afternoon game. McKechnie started Ruth in left field against Phils’ starter Orville Jorgens, an Ichabod Crane look-alike from Rockford, Illinois. The video shows Ruth tip-toeing away from several inside pitches from Jorgens. The batting star of the contest was Wally Berger, the Braves’ center fielder, who blasted a grand slam and drove in six runs. He’s #4 in the video for the Braves.

At one point in the video you see Ruth trotting across the diamond to the visitors’ dugout on the third base side after being stranded on the bases. You see the Babe wearing his trademark white long-sleeve shirt under his gray road uniform. Seeing as this rare film is in color, we get to see the flashy red script across the Phillies’ home uniforms.

Ruth played once more for the Braves, the next day in a doubleheader against the Phils. He was listed in left field and third in the Boston batting order and came to the plate in the top of the first against Jim Bivin, a paper-thin righthander from Mississippi who was pitching in only his tenth big league game. Ruth bounced out to second and left the game for a defensive replacement.

A few items you may notice in the video: the scoreboard has the home team listed first in the linescore. Of course we’re accustomed to seeing the home team last, since they always bat last. But until the late 1920s (and some sources have it as the early 1930s), the home team could choose to hit first if they desired. I believe that’s why you see the home Phillies listed first, the custom meant that the home team name was not always listed last.

A postscript on the Braves: weeks after this video was shot, Fuchs sold the team to a minority partner, thus ending a dreadful era in franchise history. Word has it that he wouldn’t have been able to pay his players in the second half of the season had he not made the deal. The team improved 33 games the next season under McKechnie, a gifted baseball man who would go on to earn election to the Hall of Fame. But the Braves, despite winning a pennant in 1948, never captured much attention from Boston fans, and in 1953 they moved to Milwaukee.

Thanks to Tom Shieber of the Baseball Hall of Fame for making me aware of this video. Visit Tom’s website for amazing baseball history sleuthing.