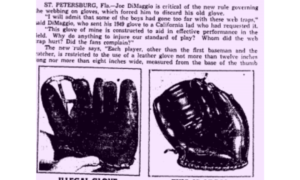 The five worst players in the Baseball Hall of Fame 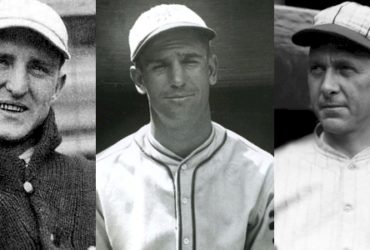 First, let me start by stating clearly that I have great respect for the Baseball Hall of Fame. I worked there for seven years, and my children were born in Cooperstown. Love the place. The village is beautiful (except when it’s buried under snow and you have to drive 35-40 miles to get to a decent store), the Museum is amazing, and the atmosphere can’t be matched. It’s a dream come true for a baseball fan.

This article is about the Hall of FAME and the men that are elected to it, and more specifically about the Baseball Writers and the various incarnations of the Veterans Committee who have elected players who were not Hall of Fame caliber. For the most part, the writers have gotten it right, and the Veterans Committee has (a few times) corrected some wrongs. But they’e also made some serious errors. Here are the five players who should never have been elected to the Hall of Fame.

Call it the Power of Poetry – that’s what got Joe Tinker into the Hall of Fame. A little poem, a throw-away column written by Franklin Pierce Adams in 1910 for the New York Evening Mail. Adams (a Cubs’ fan) scribbled the poem on his way to the Polo Grounds to watch Chicago play New York. The poem, titled “Baseball’s Sad Lexicon”, reads:

Tinker’s teammates Johnny Evers and Frank Chance were excellent players, worthy of Hall of Fame status, even though neither are all-time greats at their positions. Joe was a mediocre infielder who played on four pennant-winning teams in five years with the Cubs from 1906-1910. His batting stats are poor whether you judge them on peak value of career  value: he collected only 1,690 hits and his career slugging was .353, which is bad even for that era. The trio was inducted together in 1946 by the Veterans Committee in a nod much more to the importance of lyrical words than to their greatness as individual players.

Unlike the others on this list, Hafey was a really good ballplayer most of the time. But he wasn’t in the lineup enough to make him a Hall of Famer. He played in 140 games just twice and in more than 100 games just seven times. His career was over by the age of 32, due to health issues, but he just didn’t do enough for long enough for him to earn his plaque. Hafey was a multi-facted player: hit for average and power and could run, but he was also selfish and he was injured a lot. He owes his HOF status to Frankie Frisch, his teammate on the St. Louis Cardinals for five seasons. When Frisch was an old man he was basically the Dr. Evil of the Hall of Fame Veterans Committee for almost a decade, ruling with an iron hand. He pushed through the election of several of his old cronies. In addition to Hafey, Haines, and Lindstrom on this list, Frisch got George Kelly, Travis Jackson, Ross Youngs, and Jim Bottomley elected either directly or through his influence. It’s the blackest eye on the Hall of Fame voting ledger, and though Hafey was a good player for a short time, he shouldn’t be in the Hall of Fame when there are dozens of players who were better than him who are not.

Surely the least talented and accomplished pitcher in the Hall of Fame. Haines had the fortune of playing with Frisch for 11 years and playing under him for five. That association helped grease the wheels for Jesse’s election to the HOF in 1970 by the Vet Committee. This despite the fact that the right-hander pitched 19 years in the National League and led the league in exactly three categories: games pitched in 1920, and complete games and shutouts in 1927. In all those years he received MVP votes in only one season, and even then he was 8th in balloting. Haines was never one of the marguee pichers in the game, or even on his own team much of his career. The Cardinals went to the World Series three times with Haines as a part of their rotation, and he never once started Game One of the Fall Classic, in fact he was usually the third pitcher in their rotation. Haines did pitch well in the post-season, but he was not a great pitcher. He pitched for a very long time and was part of four pennant-winning clubs, but he won more than 13 games only four times in his 19 seasons. His 3.64 ERA is the highest of any starting pitcher in Cooperstown.

For more than a decade, Pennock was a mediocre pitcher (77-72, 3.72 ERA in mostly the Deadball Era). Then when he was 29 years old he was dealt to the Yankees and he started to win games, which isn’t hard to understand considering Babe Ruth and Lou Gehrig were his teammates. Pennock didn’t even really win that much for a Yankee pitcher in the 1920s and 1930s – he averaged 14 victories per season with the Bombers. His ERA was good in only five of his seasons with New York, otherwise it was higher than league average. He was 5-0 in World Series games, so he has that going for him. But the lefty had a career 3.60 ERA (about 5% better than league average), gave up a ton of hits, and didn’t strike out many batters at all (three per nine innings – an abysmal mark even for that era). He was a slightly better than average pitcher who had the fortune of being on great Yankee teams. He was nowhere near as good a pitcher as say, David Cone or David Wells or Kevin Brown or Andy Pettitte. Or to take a few from his era: Wes Ferrell, Tommy Bridges, Charlie Root, or Ray Kremer. And none of those gentlemen are in the Hall of Fame.

As bad as all these selections were, Lindstrom is the absolute worst, and the blame goes to the Veterans Committee, who selected him in 1976. Lindstrom was on the writers’ ballot five times and never received more than seven votes! The BBWAA obviously never thought Lindstrom was Hall-worthy, and there was never a campaign to get him in by anyone in the ensuing years, until Frisch was appointed to the Vet Committee and bandied about Freddie’s name a lot. Even though Frisch was dead by 1976, his handy work was done and the Committee saw Lindstrom’s .311 batting average as a third baseman and fell in love. The fact is, Lindstrom had a couple of fine years but he only played regularly in about nine seasons, and his .316 average isn’t that wonderful when you realize he accumulated it during the best hitting era in baseball, when a .300 average was, well… average for several seasons. How good was he with the glove? Well, consider that the year after he hit .379 with 231 hits, the Giants moved him from third base to right field. He was a miserable fielder, an above-average hitter, and he only really had a handful of seasons where he played at a high level. The rest of the time he was average.

Your last four are spot on, but your assessment of Tinker as “clod-footed” is belied by the evidence. BB Ref has Tinker as saving 180 runs defensively, comparable to Ozzie Smith.

Furthermore, those cubs teams were among the best defensive teams in baseball history. It’s pretty hard to argue that a great defensive team would have had a shortstop who was a liability in the field.

Joe Tinker a poor fielder? You must be thinking of some other Joe Tinker, not the one whom Baseball-Reference.com has as the fifth best fielder in history at any position (http://www.baseball-reference.com/leaders/WAR_def_career.shtml). I’ve seen another system that ranks him second. As for his hitting, his career OPS+ was 96, above average for a shortstop. Much better than Luis Aparicio’s or Rabbit Maranville’s 82. Tinker was the starting SS, the most important fielding position, for the team that won the most games in MLB history for one season, two seasons, three seasons…ten seasons. A team that was noted for its defense. A team whose pitchers performed far better than they did with any other team. How could you think his fielding was poor?

Also, Jesse Haines is far from the worst pitcher in the HOF. There is one guy in there so bad that he never started a game in his entire career but was strictly used as a pinch pitcher.

Lastly, you missed Tommy McCarthy, who it seems to me is easily the worst non-pitcher in the place.

That’s a good choice, too. Mike. McCarthy, as you know, was really inducted because of his status as one of Boston’s “Heavenly Twins” along with Hugh Duffy.

According to Bill James, McCarthy was perhaps THE most inventive player in the game’s history…he allegedly invented the sacrifice bunt (not a sacrifice at all, really, but the idea of bunting for a base hit, and at least moving the runner up if not successful), the hit and run, signals between 2nd baseman and shortstop, doubles teal maneuvers by the defense, etc etc ,etc…..these contributions were more important to the success of his team than his mediocre numbers) The teens through twenties has about twice as many players in as it should, due to politics….the worst modern pick is Bruce Sutter, who had 8 good years as a reliever, and 6 bad ones, for a total of just over 1000 innings. David Cone, Jimmy Key, and Jevin Brow each had more than 3000 innings, and were absolutely outstanding…..they were much better than Sutter, and pitched 3 times as many innings. Relievers in Sutters era, especially had inflated ERA’s due to the fact that they were so often brought into inning with outs already recorded, and were not charged for the inherited runners that scored. A reliever could come into a game with the bases loaded, two outs, and the pitcher up….he could walk the pitcher and give up two singles before getting the final out,, and be charged with no runs, while the poor starter he replaced got charged with three runs….not fair or accurate….Dave Righetti was a master at getting good credit for bad performances….

Harold Baines’ recent induction by his buddies is reminiscent of Frisch’s putting his boys into Cooperstown in the 70’s.Baines, a good hitter and HORRID fielder with middling power, spent his last decade in the game as a DH,but wasn’t nearly in Edgar Martinez’ category . Unless you count hanging around as a good but not GREAT DH ,his impact on baseball is minimal.Yet Dick Allen,Lou Whitaker, Bobby Grich, Mike Mussina, Jimmy Wynn,Rickey Reuschel and plenty of other infinitely more deserving Cooperstown candidates languish outside the Select Circle.Why ?