Evaluating the Early Baseball Era Ballot for the Hall of Fame 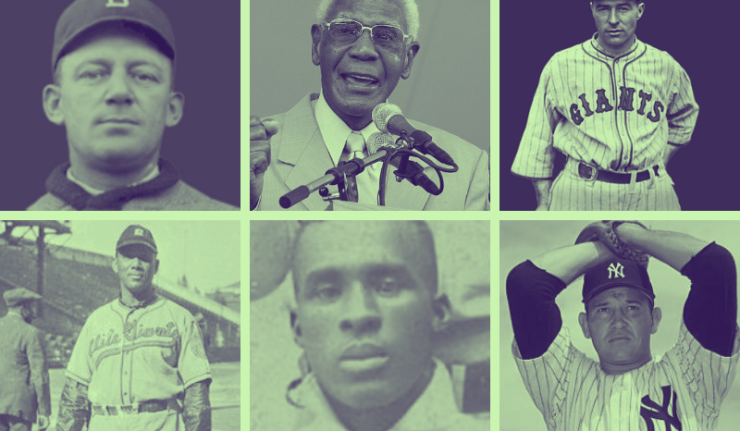 Next month, the Baseball Hall of Fame will convene a 16-person committee to vote on 10 candidates for what is called the Early Baseball Era. This group is culled from players who were primarily active in baseball prior to the 1960s. A candidate will need to get 12 votes to be elected.

At the same time, the Hall will have a group voting on players from the 1960s and 1970s. I look at those candidates in a previous blog post about the Golden Days Hall of Fame ballot.

Here’s a look at the ten candidates who appear on the Early Baseball ballot.

Baseball’s best shortstop before Honus Wagner arrived, and still a valuable into the 20th century. Dahlen was a super defensive shortstop, and he could hit some, especially early in his career. He is sort of a Barry Larkin type, but not quite as good. I’ve written more extensively about Dahlen elsewhere. You can also see where he stacks up among shortstops in something we call Greatness Score, which measures players by the number of good and great seasons they have.

There’s a good chance that Dahlen will be elected this time. He’s one of the favorites among the baseball historians of the early stages of the game.

Not JOSH Donaldson, he still needs to pad his credentials. This Donaldson played in the early negro leagues, apparently playing three decades in pro ball. He was a good pitcher, but like so many negro league stars, Donaldson also playing the outfield and managed.

Very low chance. The election of 16 people related to the negro leagues in 2006 was supposed to be the definitive statement on the Hall of Fame worthiness of those candidates. This time, it will be hard to elect one of these players who has long been dead, and whom no one ever saw play.

If we’re going to elect pioneers, Fowler is an obvious choice. He is frequently regarded as the first black professional baseball player, having pitched and played second base for teams in more than a dozen leagues throughout his career, including leagues with white players in the 19th century. Bud even spent part of his younger years in Cooperstown, so this would be a sort of homecoming. He passed away in 1913.

If we elect Fowler, who was clearly not a very good player, just because he was the first of a kind, we have to start considering Ron Blomberg, who was the first designated hitter. No offense to the memory of Fowler, who surely faced adversity, but this is not a Jackie Robinson type story.

As a baserunner, Harris was similar to Ty Cobb or Pepper Martin. Teammate Buck Leonard said, “He just undressed the opposing infielder – cut the uniform right off his back.”

Vic Harris played 18 primarily as a left fielder for the Homestead Grays, the most successful team in the negro leagues in the 1930s. Harris also managed the Grays for 11 seasons, and led them to seven Negro National League pennants and the 1948 World Series.

Had a long career: check. Led the league in some categories: check. Had a lifetime .300 average: check. Was brash and flashy: check. Harris checks a lot of the boxes, but his numbers, as we have them are not eye-popping. He batted .305, never led the league in batting, and for all his baserunning accolades, he never once led a league in steals. I have a hard time seeing how the committee justifies his election.

Grant “Home Run” Johnson was a power-hitting shortstop in the pre-Negro Leagues, a contemporary of Honus Wagner. He hit 60 home runs one season in 1894, earning his nickname. He was apparently okay with the leather, but it was his free-swinging bat that earned him attention. Johnson spent nearly four decades in black baseball, thirty of them as a player.

The nickname helps, that’s for sure. I think it’s even money that he gets elected. It will be interesting to see how the recent decision by Major League Baseball to consider negro leagues as MLB leagues impacts the fate of these candidates.

O’Doul compiled a gaudy .349 career batting average, fourth-best in the history of segregated MLB. He was originally a pitcher, and reached the majors that way before hurting his arm. He had a beautiful left-handed swing, and he managed and tutored some of the greatest hitters to come out of California from the 1930s through the 1950s.

As we have written elsewhere, O’Doul was a pioneer who basically founded professional baseball in Japan. His induction would be noteworthy, in that it would signal one of the only elections of a man for his entire contribution to the game. We have long advocated for Lefty to be inducted.

Little chance, I’m afraid. I don’t think the voters much stock in his short career as a hitter, and they don’t care about the Japanese and Pacific Coast League accomplishments.

It sort of feels like this committee’s purpose is to elect O’Neil, who has become the face of the negro leagues ever since he vaulted into prominence through his appearances on Ken Burns’ documentary series, Baseball.

The playing credentials are not overwhelming: O’Neil played 10 seasons in the Negro American League and was named to three All-Star Games. After that he was hired as a scout for the Chicago Cubs and later became the first Black coach in white MLB history with that same franchise.

The statistical record we have shows a first baseman who was maybe as good as Wally Joyner, but also had several mediocre seasons at the plate. From 1941 to 1943, Buck hit .267 with two homers in 109 games.

But it’s his pioneering stature and those marvelous interviews with Burns that elevate O’Neil to cult status.

There’s no evidence of this, but reportedly O’Neil missed being elected in 2006 by one vote. That year a special committee convened to discuss the history of the negro leagues, and also to identify the people from those leagues who deserved to be enshrined in the Baseball Hall of Fame. The committee elected 16 people, most of them players. But O’Neil was not one of them, and fans were sorely disappointed.

I think O’Neil will be elected, but should he be? If we are going to honor people for the breadth of their service to the game, I am fine with his induction. In that case we better also honor Lefty O’Doul, Dusty Baker, and probably someone like Jim Bouton.

If the voters judge O’Neil based on his playing record, there’s simply no way he deserves to enter Cooperstown. His career OPS+ of 97 is below league average, and there are well over 100 First Basemen who were better.

Sort of the Nolan Ryan of the negro leagues, Redding was known for his lightning-quick fastball, which earned him the nickname “Cannonball.” Like Ryan, Redding tossed multiple no-hitters. But unlike Ryan, Redding did not have a long career in the top organized professional black baseball leagues. He did however, pitch for close to a quarter of a century, it’s just that much of it was in the so-called deadball era.

Slim chances, in my view. Not enough statistical data exists to support his election.

Even knowledgeable baseball fans may be asking themselves “Why is Allie Reynolds on the Hall of Fame ballot?”

Well, Reynolds was once a sort of Jack Morris controversial candidate. The right-handed pitcher from Bethany, Oklahoma, spent 13 years on the Baseball Hall of Fame ballot, starting in 1956. Eight times he topped 20% support, and twice he went over 30%. But even though he was a Yankee ace with several great postseason moments, the man they called “Superchief” never was able to forge a voting bloc large enough to get his plaque.

Reynolds has a lot in common with Morris:

Morris was elected to the Hall of Fame in 2018 via a special veterans committee. Reynolds last threw a baseball in a professional game 67 years ago, but here he is still being considered. This time by a 16-person panel. Reynolds won’t be around to enjoy the honor if he gets it: he died in 1994.

Reynolds typically appeared in about 5-10 games out of the bullpen each season too. He was rugged and never had a sore arm. Bucky Harris and later Casey Stengel, loved the luxury of having “Superchief” in the bullpen if needed in a tight, crucial game.

I doubt the committee will pluck an old hurler like Reynolds off the pile and elect him. Especially considering his rather ordinary 109 ERA+, which ranks below Jered Weaver and Brad Radke, among many, many others.

I don’t frankly know much about George “Tubby” Scales. The negro leagues experts will tell you that he was a valuable infielder, usually playing third or second. He was not a particularly dazzling defensive player, but he could hit the ball. Sounds to me that Scales compares favorably to a Bill Madlock (who also battled his weight).

Scaled played 20 seasons in the Negro Leagues and posted a .319 batting average and an impressive .421 on-base percentage. His baseball-reference page claims his OPS+ was 147, which if it’s accurate, is astounding. It ranks 55th all-time in MLB history, but we must also note that it came in about 2,500 known plate appearances.

Given the attention that O’Neil and other negro leaguers on this ballot will get, I would be surprised if Scales was elected. He still seems a lot like Madlock to me, and if he was, he isn’t quite a Hall of Famer.